If I told you I just came back from Peru you would probably ask if I went to Machu Picchu or Lake Titicaca.  I did.  You might also inquire about the cuisine in Lima’s world-renowned restaurants.  Delicious.  But would you ask me about the beaches?  Probably not.  I bet you didn’t know that Peru’s north coast is almost an infinite stretch of sand – the perfect place to lose yourself for a few days or weeks.

After two weeks of traveling around Peru’s mountains, canyons, and historic sites, I decided to do something different.  I got out of the cool, damp highlands and flew north to the sweltering heat.  Two flights and a 5-hour layover later, I was greeted by the sweet smell of salt air – and the understanding that my altitude-induced fatigue would no longer be a problem.  I had arrived in Trujillo, gateway to the north.

Having been severely disappointed by Lonely Planet’s coverage of Machu Picchu, I discarded my guidebook before coming to Trujillo.  I figured I’d wing it, and let the locals tell me where to go.  My first two days were spent wandering lazily around town, shopping for a swimsuit and flip flops, and sampling the local seafood.  The region is renowned for ceviche – a dish of raw fish lightly marinated in citrus – and people are very particular about how and when it is prepared.  I learned on my first night that seafood is only eaten in morning and early afternoon, and almost never after 4pm. 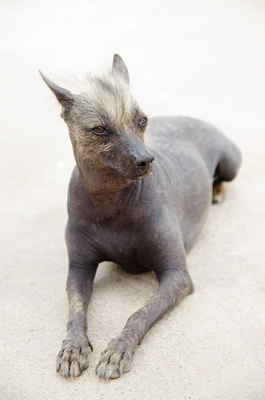 On the third day my hotel’s receptionist inquired,  “Why haven’t you gone to Huanchaco?  Why haven’t you seen the Huacas?”  I was baffled.  Apparently Huanchaco was a nearby beach town with seafood that rivaled Trujillo.  The Huacas?  Peru’s ancient mud-brick pyramids.  That’s right.  Pyramids.

In no time I hired a taxi to Huanchaco – I had to get there in time to eat more ceviche!  Less than a half hour later I was sitting in El Kero, a restaurant overlooking Huanchaco’s beach.  For 55 soles (the equivalent of about $20) I had a small but delectable portion of ceviche followed by delicately battered local fish and shrimp.  It was one of the most expensive meals I ate in Peru, and worth every sole.  I topped it off with a local beer and set out to explore the beach.

Now let me make something clear.  Huanchaco is not an upscale beach resort, with high-end hotels and restaurants, fancy cars, or expensive nightclubs.  The beach is not pristine and the sand is not pretty.  The water is even kind of murky.  But Huanchaco is a beach town in every sense – and it is a Peruvian beach town.  It’s a bustling place where people from Trujillo, Lima, and other cities come to cool off and party in the summer.

Some relax in Huanchaco’s sand with a beer while others might venture into the water on a reed boat.  The more courageous might even surf a few waves.  Crowds pack the pier to try their hand at fishing.  Young men and women socialize along the strip, laughing and exchanging kisses.  Personally, I just enjoyed wandering around taking in the scene.  Huanchaco is the kind of place where you could easily lose track of time and spend a day or two.  Sadly, the sun was setting and I had to return to Trujillo before evening. 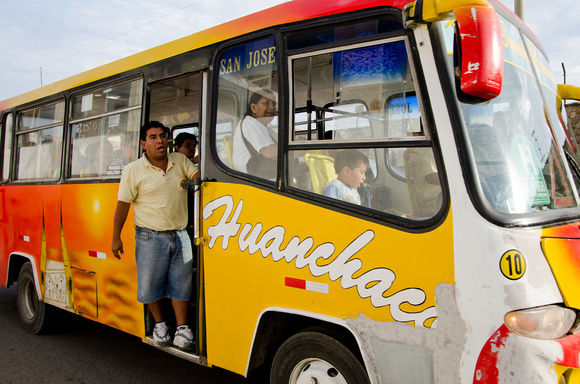 It was the following day that I joined a group tour of the Huacas – Peru’s pyramids.  Once again I’ll clarify: these are not the sort of pyramids you fly eight hours to visit, but if you’re in the area you shouldn’t pass them by.  The Huacas are remnants of mud-brick pyramids built by the Moshe people, long before the arrival of Europeans.  We wandered around the ruins of one of the largest pyramids, examining excavated bricks and exposed facades.  I thought, “neat”, and I was getting kind of bored.  Then we walked out the rear exit of the Huaca.  Looking back, I was faced with a well-preserved mud-brick structure, several stories high, covered in ornate and colorful frescoes.  I was blown away.  It was amazing to see construction so ancient and extensive, literally built from dirt, surviving until the modern day.

Trujillo had offered me warm hospitality and interesting surprises, but it was time to move on.  That evening I departed for Mancora, the fabled beach destination of the north.  I bought a few beers and some snacks, and boarded a double-decker bus for the nine-hour ride.

The behemoth vehicle lurched slowly forward on an infinitely straight road, stopping in numerous towns throughout the evening.  I slurped my beer and watched poorly dubbed American movies until I passed out sometime around midnight.  I was awoken around 3am when the bus started swaying. We had reached the end of the straight road and were now winding our way through hills and alongside cliffs.

Just past 4am our bus pulled into Mancora.  The streets were empty, except for a few taxi drivers sleeping on mopeds and rickshaws.  We came to a stop in the town center and just one person stepped off: me.  The bus pulled away, leaving me in its exhaust.  It seemed like a ghost town but the moped and rickshaw drivers must have heard the bus, because I wasn’t alone for long.  I quickly negotiated a ride to my hotel – or rather to the path I’d climb to reach my hotel.

I had decided to stay in a slightly removed place called Kon Tiki.  It’s run by a Swiss and Peruvian couple who must have harbored dreams of thatch roofs and endless surf, and it’s actually a pretty nice place.  The bungalows sit atop a hill overlooking Mancora, with a spectacular view.  This also makes for a nice breeze, fewer mosquitoes, and less noise from the town's nightclubs.  It was worth the five-minute slog up a steep dirt path at 4am.  I reached the top and the reception was closed.  I passed out on a couch in the lobby.

I must have slept for a couple hours before being prodded awake by the eager receptionist.  "Tienes una reserva?" Yes I did, and I had simply arrived a day later due to the inconvenient bus schedule.  After shuffling me between different bungalows the receptionist got everything straight and I prepared for a day on the beach.

Mancora is much different from Huanchaco.  It's also a fairly low-key beach town, but it's a destination for foreign tourists - particularly surfers.  The beach is incredible and it stretches for as far as the eye can see, but I was warned against walking too far north.  Apparently "delinquents" frequent the quieter areas and have been known to mug tourists, so I left my more distant forays for morning jogs and did my lounging near the center.

The town has a number of good restaurants and the seafood is extremely fresh - even at night!  At La Sirena d'Juan I watched fishermen carry in fresh whole tuna, which I promptly ordered.  My first course was a chef salad with crunchy shrimp, prosciutto, and mango.  This was followed by the most tender tuna steak I have ever eaten, lightly seared and served in a soy and rocotto pepper sauce.  For dessert I had a piece of lucuma and coffee mousse cake, with a rum-infused crust.  Nothing short of exceptional, and now my most expensive dinner in Peru, at approximately $50.

There's not much to do in Mancora besides bumming around town and enjoying the beach, but if you have spent a couple of busy weeks exploring the Peruvian highlands, it might be just what you're looking for.  It's not easy to get there, but the trip is half the fun!

Surfing Northern Peru(non-registered)
I was Surfing Northern Peru when I was there and missed out on a lot of the culture. Gues I'll have to just take another trip then !
No comments posted.
Loading...
Subscribe
RSS
© Travis Ferland Photography
Powered by ZENFOLIO User Agreement
Cancel
Continue