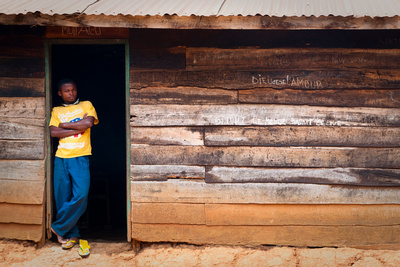 War, rape, conflict minerals: terms frequently associated with the Democratic Republic of the Congo (DRC).  We often hear news of attacks in North and South Kivu, stories about warlords ordering villages to be burned, or foreign armies wresting control of mineral resources that will eventually be used in cell phones and iPads.  Based on news reports it would seem that DRC is simply a land fraught by ethnic strife and torn apart by a never-ending battle for resources.  So why should we care?  Isn’t it a lost cause?

In August 2010 my employer sent me on a three week trip to DRC.  Arriving in Kinshasa, I was overwhelmed.  This vast city of 10 million sprawls well into the countryside, its streets clogged with traffic and pedestrians.  Congolese mostly live in slums or simple neighborhoods on the periphery of the city, while UN and NGO employees populate the more established and developed city-center.  In fact, there is even a strip of road along the river where Congolese are not allowed – a sort of “green zone” for the expat population.  Smart new boulevards slice through the downtown, allowing traffic to breeze past office towers and shopping centers – only to slow to crawl at the city’s edge, where four lanes merge into one.

On a visit to health facilities in Ndjili, a community near Kinshasa’s international airport, a group of children playfully chased our vehicle.  Accustomed to this not so uncommon sight in Africa, I paid little attention.  However, after about ten minutes the number of children had grown.  They were rushing from makeshift houses and schools as we passed, and they continued to follow us for hundreds of meters.  By the time we reached the community clinic, the crowd easily numbered in the hundreds.  “Mayi, mayi!” they cried.  After asking one of my colleagues, I was told that mayi is Lingala for water.  He went on to explain that the community, with a population of over two-hundred thousand, had only three working water points.  That’s an entire city like Arlington, Virginia or Rochester, New York – with fewer faucets than I have in my apartment.  I was blown away. 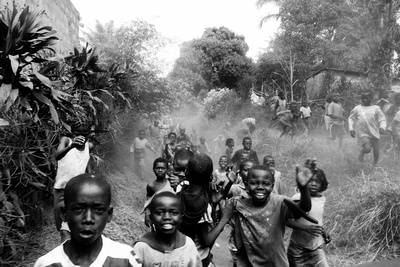 Yet something about Ndjili astonished me: despite the rutted dirt road, lack of water and nonexistent community infrastructure, this community was remarkably resilient.  Young men tended to a dry-season riverbed terraced with immaculate vegetable gardens, children played soccer on a dusty field, women pounded grain for the next meal, and medical staff attended to the needs of new mothers.  There was still a level of vibrancy in this community – signifying a potential that has yet to be realized.  Imagine the impact that a water system would have by reducing illness and child mortality, improving nutrition, and alleviating the burden on women and children who spend a disproportionate amount of time carrying water to their homes.  That’s more time to take care of families, to study and to play.  Ndjili is not a lost cause – with just a little assistance its residents would be much better off.

Wherever we went I witnessed the same phenomenon.  People were making the best of their situation, and small projects had a marked impact.  Such was the case in many of the villages I visited near Bukavu, the capital of South Kivu in the eastern part of the country.  Here the International Rescue Committee is running a community-driven reconstruction project called Tungaane.  The program seeks to instill values of democratic decision making and local governance while providing villages with training and funding to work on the project of their choosing.  One village had constructed an access road and a community center while young men were continuing to use tools from these projects to build furniture for sale.  They even donated a portion of profits to their Village Development Committee for future projects.  Another village had built a new school so that class would not be cancelled every time it rained.  Yet another village purchased a grinding mill so that women and children would no longer need to walk to the market in order to make flour.  This community had even drawn up an operating plan for the mill, detailing hours, maintenance, expenditures, and the distribution of some profits to the village’s elderly and disabled.  Seemingly small improvements were making a big difference in the lives of people in these communities.

Yes, it is true that conflict continues in DRC.  Rebel armies control vast portions of the country’s eastern provinces and launch frequent attacks on innocent people.  Indeed, the push for control of mineral resources fuels much of these conflicts; the country’s northern and eastern neighbors are not innocent in this regard.  Neither are we, since many of our electronics purchases help to fuel the violence with arms and ammunition.  It is important for us to be aware of such injustice and to take action against it, but at the same time we must support efforts to improve everyday life for those affected by these conflicts.  In order to build peace we must help strengthen communities.  That’s why last week I went to a fundraiser for a promising small organization called Now AfriCAN.

Now AfriCAN has a unique approach to helping youth in post-conflict regions by improving their access to education and providing them with an outlet to express themselves through new media.  The organization also seeks to fund the initiatives of young entrepreneurs.  Many of the people on their web site are orphans or former child soldiers who deserve a second chance.  The purpose of last week’s fundraiser was to provide some of these youth with netbooks so that they would have better access to the web for writing reports from their communities.  It’s a novel approach to restoring hope where it is needed most – in communities brushing off the scourge of war.

What are your thoughts about the situation in DRC?  How accurately do you think the media portrays this country?  Are you familiar with other organizations that are helping Congolese communities to reestablish themselves?  Please, share your thoughts.

For more information on how you can get involved, please visit Friends of the Congo.